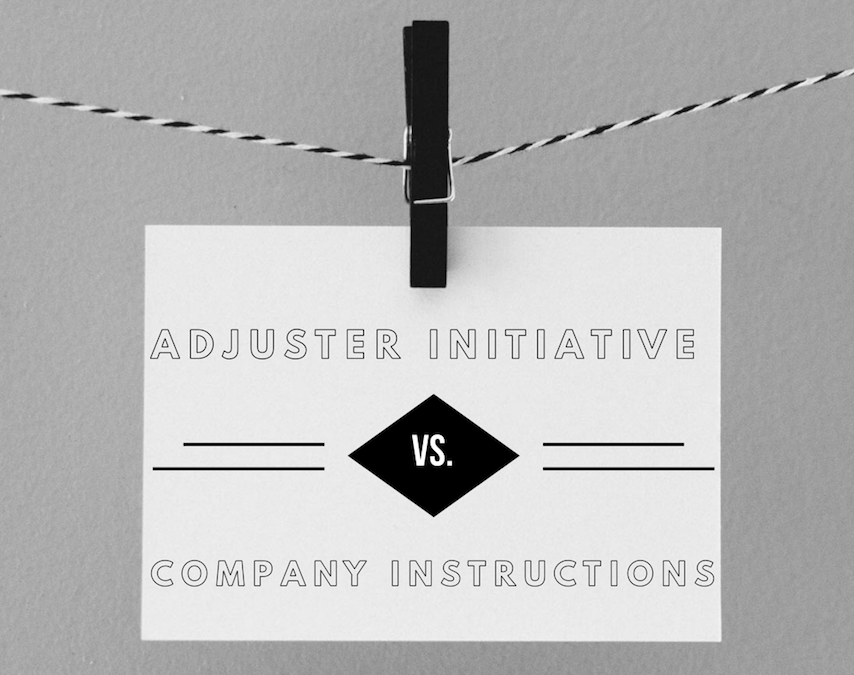 To what extent should an independent adjuster use his initiative when handling an assignment versus sticking rigidly to company instructions…that is the question!

The mark of a good adjuster is one who can fully understand where the examiner is coming from and fully duplicate what problem the examiner is trying to solve or what end goal he is trying to achieve. If an adjuster out in the field can do that, he is already half way there towards doing a stellar job for his client.

The Two Types of Adjusters

Same 1,2,3 but the detail that Adjuster B takes is clear.

Adjuster A, not being able (or too lazy) to align with the purpose of the examiner takes 3 weeks to get the police report by mail, gets just the one witness statement, notices the other damages to the insured vehicle but dismisses it as “not part of the assignment”. Oh sure, Adjuster A has done what was asked-nothing more nothing less. Adjuster A has an overriding principle, senior in importance to EVERYTHING else, and that is that you must NEVER do more than is asked for in the assignment, even if it does leave holes in the investigation and leaves some stones unturned.

Now as an examiner, if you were asked which adjuster would you rather use on an assignment, A or B, it would not be too far off beam to hazard that 90% of examiners would prefer Adjuster B. Why?  Because although Adjuster B “broke the rules” slightly, in the final analysis, he accomplished far more and was much more helpful to the examiner than Adjuster A.

And so, the somewhat philosophic question about how much initiative an independent adjuster should use versus sticking rigidly to company instructions is hopefully answered by the examples delineated above.

In the end, it comes down to good judgment and being able to strike that balance between doing what was asked but at the same time doing that little bit extra to really deliver what the examiner is actually looking for.